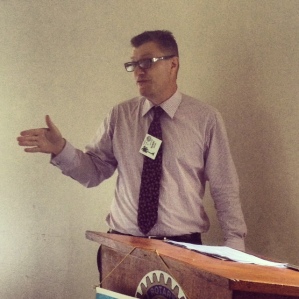 “Being a Rotarian is not about coming to lunch and paying $20 for a meal. That is not how we make change.” –Adrian Hughes

Welcoming remarks from competing banks, “We always like competition- competition gives people choice,” Adrian also reminded us that Westpac is Australia’s first bank and its first company, incorporated in 1817. They are also one of the world’s largest and safest bank- ranked lucky 13th for each.

Adrian was proud to share some of the bank’s efforts to promote Corporate Social Responsibility over the last few years. Westpac’s CSR policy is focused around supporting and promoting Health (with its monthly morning walks), Education (with financial literacy in schools), and Women in Business (with their scholarships for women, grants to girls, and Westpac Women in Business Awards).

Given his passion for giving back to the community, it’s no coincidence perhaps that Adrian is also the current President of RC Suva, Fiji’s oldest Rotary Club.  Adrian was asked to join RC Suva and a few months later he was asked to become president elect. It’s been a challenge but “It’s the most rewarding thing I’ve done,” he told RCSE.

“I never knew much about Rotary before the President’s elect training. It’s not the same here as it is in Australia- all Male, Pale and Stale retirees. Rotary clubs here in Fiji are full of relevant, influential people involved in their communities!”

Adrian has done a lot to encourage club participation, which he feels is based on fellowship, fun, good speakers, and relevant, meaningful projects. To get ideas for meaningful projects, club members met with the Minister of Health, Dr. Sharma. They decided to focus on an awareness campaign for Rheumatic Heart Disease- a preventable disease caused by the streptococcus virus that affects large numbers of children in Fiji. The terrible, life-long symptoms of the disease can be prevented with early detection and treatment, but none of those things are possible without awareness.

RC Suva has dedicated this entire year’s $130,000 FJD fundraising to an RHD awareness program. It will run the week of June 2-7 and all Rotary Clubs are encouraged to join in and help promote the worthy cause!

To learn more about RHD, click here to link to a pamphlet from the Fiji Rheumatic Heart Disease Control Programme.

All the news, plans and projects of the Rotary Club of Suva East. District 9920. Chartered 1980.