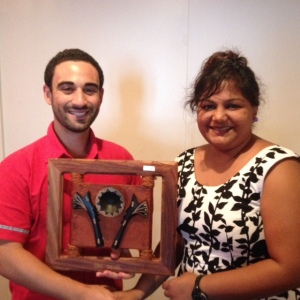 Eric receives a thank you and farewell gift from President Michelle

For the last 2 years, RCSE has been privileged to host Global Grants Scholar, Mr Eric Siegel, as he has pursued his Masters in Development Studies at USP. During this time, he has also provided significant assistance to the Rotary Pacific Water for Life Foundation and has interned for UNICEF as a programme analyst.

On Monday 1 June, Eric presented the topic of his masters research to RCSE. Working with the Ministry of Education and the Water Authority of Fiji, Eric has conducted a study of sanitary behavior in schools. He asks the key question of what are the limitations and barriers to students putting sanitary behaviors into practice?

Some of the key barriers Eric’s study highlights include lack of easy access to toilet paper; lack of school budget to support purchase of sanitary supplies like soap, toilet paper etc.

Failure to use proper sanitation leads to a number of easily preventable diseases which are prevalent in Fiji schools, such as scabies, diarrhea, typhoid, and trachoma to name a few.

Eric has been an exemplary student and his research has contributed toward understanding and capacity building in sanitation awareness and behavior change in schools.

Originally from North Carolina, USA, Eric is a keen surfer and has fallen in love with the Pacific during his time here. He hopes to return to work in Water Sanitation and Hygiene in the region in the near future.  RCSE wishes him all the best with the completion of his thesis and his masters degree. Bon voyage, Eric, and we hope to meet again!

All the news, plans and projects of the Rotary Club of Suva East. District 9920. Chartered 1980.